Goiat, the new Slovenian brown bear that has been liberated at the central Pyrenees

The technical staff of Piroslife project has successfully liberated this Monday evening in the Natural Park of the High Pyrenees a new brown bear (Ursus arctos) from the game preserve Jelen (Slovenia). The specimen is a male aged between nine and ten years old, weighing approximately 205 pounds and has been christened Goiat. This word, in the variant pallaresa means young boy or single.

The Director General for Environmental Policy, Ferran Miralles, explained that “yesterday, at 9 pm in Isil, under rain, has been liberated the new male”. The fact of named Goiat “responds to the objective” of his liberation, “the young one to replace old male Pyros, who dominated the genetics of the brown bear in the Pyrenees last 20 years”, said Miralles.

The reason for the translocation of the plantigrade is the need for a breeding male among the Pyrenean population of the species to break the dominance reproductive bear Pyros and provide more genetic variability. Pyros, also of Slovenian origin, from the reserve of Medved, about 100 km from Jelen, arrived to the central Pyrenees in 1997. He is the father, grandfather or great grandfather of almost all the bears in the area, with the effects this can get to have on the reproductive vigour and on mortality of individuals. It is currently estimated that between 30 and 35 live bears are living in the central Pyrenees, of which seven are adult males and ten adult females in reproductive age.

Goiat’s moving has been monitored at all times by the technical team, formed by nine people. The team has custody of the animal from its capture, has transported by road in the most appropriate conditions until the liberation in the lands of Natural Park. When they have captured, placed finger cymbals on the ears for easy identification in freedom.

It also installed conventional emitters in the ears, in addition to a GPS transmitter necklace that will allow them to locate it at any time and learn a lot about their movements, habits and behaviour. Also, they have taken samples of blood and hair which will genetically analyze, as well as their health. The technical director of Piroslife project, Santi Palazón, explained that the samples serve “to check that the animal is well and to study its genetics, and after also will be useful for detect their reproduction.” 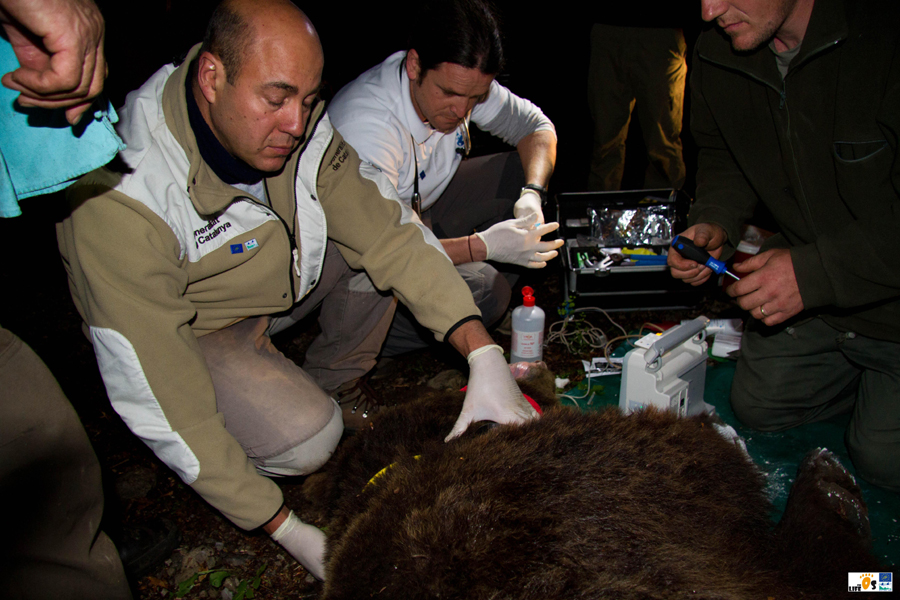 Palazón has also explained that “it took six attempts to capture” at the Slovenian reserve before finding “the exemplar we wanted”. Finally, this took place on Sunday, June 5, between 20 and 21 hours. The team left Slovenia at 2:30 early on Monday and arrived in the Catalan Pyrenees at 20.30 hours yesterday, Monday 6 June.

When the batteries from issuers are exhausted, the bear will be located by conventional following. This working method consists of passive search and detection of traces left by the animal in their movements, such as excrements, footprints, hairs and other evidence, in addition to the photo trapping.

The liberation was attended by some mayors and presidents of local entities from Pallars, with permanent presence of brown bear, such as Alt Àneu, Lladorre, Alins, the EMD of Isil and Alòs, the County Council of Pallars Sobirà and governing board of the Natural Park of the High Pyrenees. Park director, Marc Garriga, explained that this decision reflects “This release has been made by consensus with the territory” and, therefore, its representatives “have enjoyed the moment of liberation from in cars, for safety reasons”.

History of a reintroduction

In the mid 90s the brown bear was about to become extinct in the Pyrenees. It was only a remnant population in the Atlantic area, between France, Navarra and Aragon. The extinction would have represented, among other things, the loss of a basic piece with fundamental importance in the ecosystem. Therefore, during the second half of the decade was developed a LIFE program, coordinated between France and Spain with Navarre, Aragon and Catalonia. The main objective was to make a pilot experience. They released three bears in the central Pyrenees to assess their environmental adaptation and test the methods of translocation.

Specifically, in 1996 they introduced two female, Ziva and Mellba and in 1997, a male, Pyros, all coming from Slovenia. The origin was selected considering studies that show that Balkan bears of the south of Scandinavia, and southern and south-western Europe belong to a unique genetic line that is because there was a refuge during the last glaciations in southern Europe.

These specimens have adapted and had cubs in the area. The French government, after signing an international protocol of cooperation with Andorra and Spain, liberated five new bears in 2006. There were four females, of which only two are still alive -Hvala and Sarousse- and one male-Balou- who died by the impact of lightning in 2014.

From the earliest progenitors, at the central Pyrenees (Val d’Aran, Pallars Sobirà, Pallars Jussà, Alta Ribagorça, Alt Urgell and Cerdanya) have been obtained first and second generations, completing the biologic cycle and have not appeared problems adaptation. Genetic variability is low but not extremely low for the number of founders. Pyros, which is 27 years old and is approaching old age, has reproduced in 16 times between 1997 and 2016 with six different females, and have had 28 children known. Practically all the males in reproductive age are direct relatives.

The latest data confirm that the only unrelated to him, Balou, had one son posthumous, in 2015, the female Plume. Instead, breeding females represent three different stirpes, coming from the founders Ziva, Mellba and Hvala.

Consolidate the future of plantigrade

In 2014 the European project LIFE + Piroslife was launched for the “consolidation of a bear population in a territory with fragmented management: the central Pyrenees”, with the help of five members: the Department of Territory and Sustainable and Catalan Forestry of the Government of Catalonia; the Aran General Council; the Brown Bear Foundation; and the University of Lleida.

The project has a budget of 2.5 million Euros, 75% of funds from the European Union (EU) are fitted in the Life-Nature programs who want contribute to the implementation of EU Directive relating to nature conservation to maintain and improve the habitats and species of communitarian interest of designated areas in the Natura Network 2000.

Piroslife is designed to implement a series of measures and actions that can help consolidate the future of the brown bear in a favourable environment and generate products and systems that can be exported to the rest of the Pyrenees and in other parts of Europe. The project is considered key to the economic revitalization of the area taking advantage of the attractiveness and potential that can generate wildlife and natural heritage for tourism and other sectors. Among the various actions being carried out include those relating to the promotion of coexistence between brown bears and extensive livestock (with sheep, goats, horses and vaccine) and Beekeeping Mountain; conservation and habitat improvement; environmental education; communication and training; and the liberation of the new issue.

Miralles announced that “now we have three years ahead where we focus on bear cohabitation with other productive sectors” because the presence of plantigrade “can be another resource for the territory”. The measures being promoted work “for a more peaceful and calm coexistence”, he said.

Bears are omnivorous animals. Three quarters of their diet is based on plants such as herbs, nuts or fruit-, as well as insects, honey, mushrooms and eggs. They usually meet their needs using carrion meat of ungulates, though documented cases of depredation on livestock and beekeeping.

The Actions aimed to favour the coexistence with this sector is one of the main themes of the project. Not for nothing represent approximately 40% of the budget Piroslife, i.e., more than one million Euros, mainly in Pallars Sobirà and Val d’Aran.

In this sense, Miralles explained that “this summer we will have developed a method of insurance policy by which the Government will ensure that livestock for damages of bear, wolf or vulture, instead of farmers”. Thus, “if there are damages, the payment can be made in five days, once insurance assessment”, a term much more agile than today, has specified.

We are doing different actions for the prevention of attacks of brown bear on herds and beehives. In addition to the payment of damages, there is a program to support farmers and owners of herds in extensive regime mountain to group their flocks as effective measure of protection and vigilance when they pasture in areas with presence of brown bear.

Have been hired herders and assistants herders of sheep and goats, cowboys and donkeys to control and monitor the animals in the mountains and also carries out the installation, monitoring and maintenance of electric fences installed to protect beehives of bee farms against possible predation.

Recovering biodiversity and boost the region

Up to now have been hired herders (two in Aran and three in Pallars) and assistant Herders of sheep and goats, three cowboys, and herding services. Have also grouped a about twenty herds. It have built four cottages for shepherds and 12 dogs were provided for his protection, in addition to installing closed electrified. Thanks to the collaboration with the sector, workshops were held to select joint proposals for future management and have been offered training for herders and farmers regarding the coexistence with brown bears, through school shepherds, agrarian schools and different associations.

This is, in short, to support the conservation of the brown bear as a recovery of biodiversity, but also as a dynamic element, making effective coexistence with the inhabitants of the territory, supporting them to reconcile activities with the presence of plantigrade.