The bear population in the Pyrenees reaches 52 specimens

The Cross-Border Monitoring Group of the brown bear in the Pyrenees has taken stock of the brown bear population in 2019, and of the monitoring and conservation actions carried out during the last year. It was in a telematics meeting as a result of the coronavirus health crisis, which was attended by representatives of the Generalitat, the General Council of Aran, the Government of Andorra, Aragon, Navarre, France and the Oso Pardo Foundation.

The latest figures show that the bone population now reaches 52 specimens, compared to 40 that were initially identified in 2018 (although later indications put this figure at 49 specimens). This figure corresponds to the minimum number of bones detected in a given year, and is reviewed annually. Therefore, in 2021 this initial figure of 52 copies will be revised again.

In terms of the number of births, a total of 10 new cups from 5 different females have been registered. This is a record figure, only achieved before the years 2016 and 2017, so it returns to the highest birth rates in recent years. The females that have been bred are Sorita (2 puppies), Isil (2 puppies), Caramelles (2 puppies), Bambou (2 puppies) and Fadeta (2 puppies). 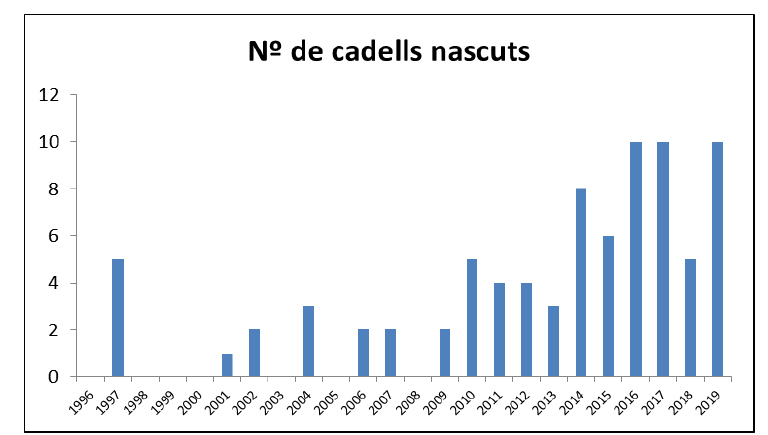 After more than two years without any evidence, the specimens that are considered dead during the past 2019 are 6. Among these, the female Hvala, last detected in 2017; the male Fifonet, as well as the 2 puppies of Sorita.

Majority presence in the central Pyrenees

The geographical area where has been found sometimes evidence of the presence of brown bear in the Pyrenees (and which should not be confused with the area where there is a permanent presence of these animals) has been expanded in 2019 by 3,000 km2 compared to 2018 and already represents an area of 10,400 km2. It should be noted, however, that much of this increase is due to a punctual exploratory displacement made by the male Goiat in the spring of last year, during which he visited areas far south of the Pallars Jussà and the Aragonese Ribagorça, far away of the usual areas.The area of distribution of the bear extends mainly through the central Pyrenees (7,800 km2). In the Atlantic Pyrenees, females Sorita and Claverina, and males Nere, Cannellito and Rodri have been found, especially in northeast Navarre and the French side.

Finally, with regard to the monitoring of the species in Catalonia, during 2019 were located 440 bone signs, of which 190 are photographs and videos and 141 are hair samples. Throughout Pyrenees have been found 440 signs or traces, in addition to the locations of the specimens equipped with GPS.