In 2015, 29 brown bear specimens were identified in the Pyrenees. These had different origins and were distributed over two nuclei:

From the data obtained and the methodology types used (hair traps, automatic photo and video systems, observations, damage and depredation, signs and tracks, etc.), it is difficult to know the current bear population of the Pyrenees, although an estimate can be made.

Using the data obtained from genetic analysis, automatic photo and video systems and visual observations, the specimens identified in 2015 were as follows:

The good news is that Balou reproduced with Plume before he died after being struck by lightning in 2014. The male cub could offer fresh hope for the future of the population of the central nucleus. Along with Goiat, the bear released in June 2016, he could bring new blood to the Pyrenean bear population. The paternity of three-and-a-half-year old Pépite was also a pleasant surprise, since males do not usually reproduce until they are at least five years old.

Five litters, consisting of 10 cubs, were identified in 2016, a record for the Pyrenees in the last 20 years. Genetic analysis of the samples will provide information to establish which females and which males are the parents. 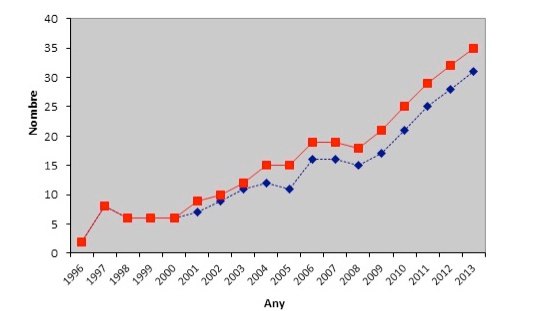