Coinciding with the beginning of the hibernation exit of many of the bears that inhabit the Pyrenees, the PirosLife project team analize the2018. In total, in 2018 40 specimens have been detected in the Pyrenees of France, Aragon, Navarra and Catalonia, 3 less than the initial count of 2017 (43 bears).

Among the forty-one specimens detected in 2018 there are 5 were born in 2018, of the Nheu females (3 puppies) and Chataigne (2 puppies). One of the young bear of Chataigne has ended up dying.

The Pyros male is given by death

In total there are 3 bears that have disappeared during 2018: a yong bear of Chataigene, the Gribouille bear (without traces since 2016) and the male Pyros. The latter has no news since the beginning of April 2017, when he was photographed in Aran. With 29 years (about 80 of the humans), and after this time without traces, the PirosLife team considers him dead.

Pyros has been the dominant male in the Pyrenees for more than twenty years. Their descendants add 55 copies, of which 30 are direct children. 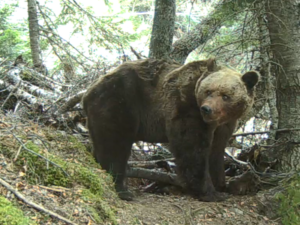 Precisely, to break with the reproductive dominance of Pyros and bring genetic variability to the community of bears of the Pyrenees, in 2016 the Generalitat released Goiat, a young bear from Slovenia, because the Balkan bears from southern Scandinavia, and those in the south and southwest of Europe belong to a single genetic line. At the moment, Goiat, which has a GPS necklace that monitors its movements, continues at this time hibernating.

The monitoring of the bones of the Pyrenees is one of the actions included in the PirosLife project for the consolidation of the population in the central Pyrenees. In this sense, there is a team of 8 people (4 in the Vall d’Aran and 4 in Pallars Sobirà), who follow the biological traces (hairs and defecation) of the plantigrades, take samples and analyze them, in order to evaluate the evolution of the community, with the support of Rural Agents. They also make itineraries to find footprints and other signs. In these established itineraries there are placed traps of hairs, to take samples systematically. It also monitors with automatic photography and video systems, with 39 cameras in Catalonia, 45 in France and 22 in Aragon.

All this work has been translated into 2018 in 57 itineraries made in France that add 446 km of routes, which have allowed to find 1,186 bears indications. In Aragon, 23 bears samples were collected, while in Catalonia 446 samples were collected in 2018 (5 in Alta Ribagorça, 182 in Pallars Sobirà and 259 in Vall d’Aran), as well as 207 images. In total, 161 samples were analyzed (121 from France and 40 from Catalonia). Thanks to this monitoring and the exchange of information, data were obtained from the male Nere everywhere during the year 2018 (Pyrénées Atlantiques, Ariège and Val d’Aran).

The Generalitat coordinates the PirosLife bear consolidation project in the Pyrenees, in which the Conselh Generau d’Aran, Forestal Catalana SA, the University of Lleida and the Oso Pardo Foundation also participate.