The program to monitor the brown bear at Catalonia has allowed define the area with permanent and continuous presence of these animals. This area affects the whole of the Aran Valley and the northern of Pallars Sobirà, that is, the Valls d’Àneu and the headwaters of the Vall de Cardós and Vall Ferrera. Outside this area, the presence of bear can occur but very punctually and sporadically.

Based on this information and taking into account that this year ends the aid of the European Piroslife Project aimed to preventing the damage caused by bear to livestock, the Generalitat will concentrate the available resources in areas where there is a risk in order to guarantee to affected farmers the same standards of protection last year.

In previous years, the available resources had been dispersed, making a similar investment in grouping herds, recruiting shepherds and ovine surveillance, both within the area affected by the continued presence of bear, and outside this area. Specifically, in 2017, 112,000 Euros were allocated for this concept in the risk area and 85,000 Euros in areas where the presence of bone is only punctual and sporadic.

For 2018, in the area with permanent presence of bear the Generalitat will ensure the totality of the prevention device. Some improvements on extension of the monitoring periods are studying to being made for this year’s of some groups and of the troops for the monitoring of big cattle. However, out of this area no money will be allocated for the grouping and surveillance of herds. This affects the herds of the lower part of Pallars Sobirà and some herds of Pallars Jussà and Alta Ribagorça under the management of the FECOC.

On the other hand, the compensations for accredited damages of the bear on the livestock will be maintained, both inside and outside the permanent zone with presence of bear, and both local cattle as stranger.

The map of the permanent zone of brown bear has been obtained by the sum of all the locations of the bear during the period 2013-2017 and from the 95% kernel, which is the space in which there is a 95% of probability of detecting bear evidence. Subsequently, for added security, an additional band or perimeter buffer of 5 km has been added around.

The locations were based on the set of confirmed evidences through photographic contacts (with photo trapping cameras), footprint detection, observations validated by experts, excrements analysed, samples of hairs collected in traps and confirmed depredations.

It is important to emphasize that the demarcation of the area with a permanent presence of brown bear is not rigid and will be adjusted every year based on the monitoring program of this species. If the bear population expands, the prevention device will also be expanded, so that herds that are now outside the damage prevention program will be incorporated in the future if the risk of suffering damage justifies this. 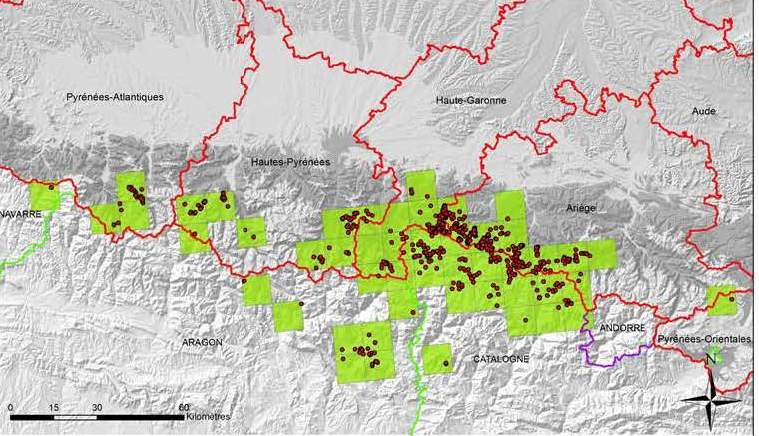 Distribution of the brown bear in the whole of the Pyrenees

With regard to sheep farming, the program offers seven grouping of cattle monitored: those of Gausac-Casau, Bagergue and Beret, in Aran; and those of Isil, Tavascan, Bonaigua and Boldís-Àreu, in Pallars. The monitoring system has the presence of shepherds and assistants throughout the day, including night hours, in which the livestock is closed in electrified folds, protected by protection dogs and next to the shepherd’s refuge. It also provides, for this livestock, insurance for accidents and other damages that it may suffer.

In addition, it incorporates investments to protect livestock such as the arrangement of huts for pastors, relocating of huts and prefabricated cabins, purchase of autonomous electrical systems, furniture and utensils, etc.

With regard to bovine and equine livestock of local farmers, it offers the hiring of shepherd for support in the surveillance and detection of possible incidents that may arise to the animals during their stay in summer pastures.