Llavorsí, 4th May.- The Director General of Environmental Policies and Natural Environment, Ferran Miralles, presented on Thursday in Llavorsí (Pallars Sobirà) the new Plan for prevention of damages by brown bear to farmers in the area. This plan plans to strengthen the system of flock grouping and damage prevention in areas where there is a continuous and stable presence of the animal. In this way, it will give a greater coverage to the livestock farmers, increasing the number of shepherds and assistants, and making more effective the available resources and the objective of conservation of the species.

The program is designed to respond to local farmers who may suffer attacks, depredations and possible consumption of dead cattle, and that the presence of the brown bear is not an added inconvenience to their livestock management. That is why the Department of Territory and Sustainability will notify all local producers of sheep and goats not currently participating in the prevention program and grazing in the stable area of brown bear, the offer and convenience of carrying out the grouping and monitoring of their flocks through the financing of the Generalitat. This grouping will be carried out according to a minimum number of heads of cattle, which will depend on the mountain orography conditions and the carrying capacity of the pastures. In total, it is estimated that they will receive between 6,000 and 6,500 heads this season.

At the same time, the General Council of Aran will continue to support them in their territory for the management and monitoring of the Piroslife program.

Regarding sheep and goat farming, it has been proposed to continue with the groupings that worked last summer (Gausac-Casal and Beret at Aran and Isil, Tavascan and Boldís-Àreu at Pallars), adding a new one in Bonaigua-Muntanyó and, according to the number of heads of cattle, the possibility of carry out another, for the first time for goats, in the Valley of Cardós. The surveillance system will be attended by pastors and assistants throughout all the day, including night hours, where livestock will be closed in electrified fences, with protection dogs, next to the shepherd’s refuge.

In addition to increasing the resources for grouping herds, a number of other investments are planned to protect them, such as the construction of a wooden hut cattle for the grouping of Boldís (Estanilles), the configuration of a hut cattle in Aran, or the purchase of bunkhouses for the groupings of Boldís and Bonaigua, among others.

This year will continue supporting the management of bovine and horse cattle of local ranchers, through the recruitment of support staff in the headwaters of the valleys of Pallars Sobirà. This action does not apply measures of prevention of damages but of support to the sector, with the control and the detection of possible incidences that may arise to the animals during their stay in the summer pastures. The controlled areas increase this year in Vall de Cardós, Alt Àneu and Guingueta d’Àneu.

The Generalitat will offer a new insurance to the flocks guarded, which will cover the totality of the deaths, with a franchise of three sheep, also for the accidents attributed to meteorological phenomena, outrages, demolitions and disappearances, responding to a historic claim of the sector.

In the remaining areas, the budget and preventive actions of the previous year will be maintained, and the Generalitat will allocate 100,000 Euros. To these figures must be added the expenses made by the General Council of Aran for other concepts, such as management and monitoring.

During the past year, 33 attacks on livestock and beekeeping were attributed to bears; 8 in Pallars and 25 in Aran, and 37 compensation cases have been opened. The Generalitat of Catalonia has indemnified, or will indemnify, all of these damages for an amount of 9,332 Euros.

The actions aimed at promoting coexistence with these sectors are one of the main axes of the project. They represent approximately 40% of the Piroslife budget, which it means more than one million Euros during the five years of the program, mainly by Pallars Sobirà and Val d’Aran. This is to support the conservation of the brown bear as an element for the recovery of biodiversity, but also as a revitalizing element, making effective the coexistence with the inhabitants of the territory, giving them support to harmonize its activities with the presence of plantigrade and promoting, as a tourism product, the visit of its habitat. 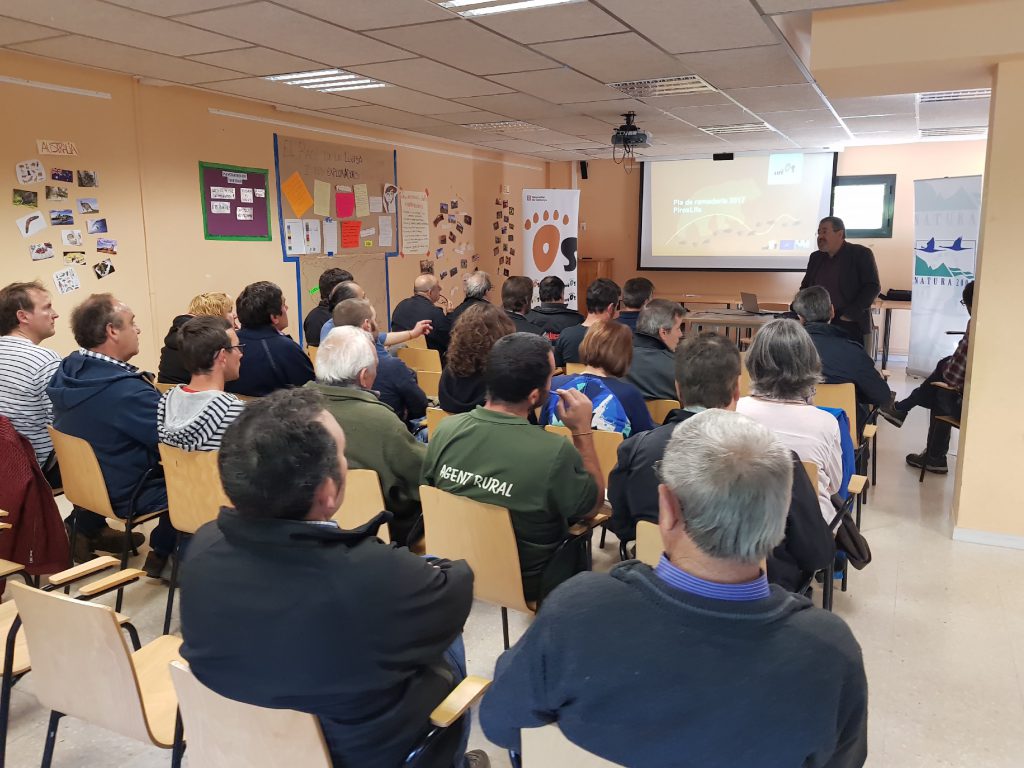 The project also is contributing to boost employment in the local livestock sector by hiring local shepherds, shepherd assistants and cattle tenders, some of whom have been trained in the school of shepherds of Catalonia. Thus, it’s recovering the work of high mountain shepherd in this area of the Pyrenees where almost was lost.