The general director of Environmental and Natural Environment Policies, Ferran Miralles, today defended the bear consolidation in the Pyrenees project, as a “double commitment of the Government for biodiversity and coexistence with human activity.” During a press conference, Miralles highlighted the “the valuable work done around the Piroslife project” for the consolidation of the bear in the central Pyrenees, which, in addition to the Generalitat, involves the General Council of Aran, the Pardo Bear Foundation, Forestal Catalana and the University of Lleida, since 2015.

Miralles acknowledged that “the presence of the bear means an additional discomfort for the affected livestock sector”, because it forces to return to the surveillance and protection of the herd, a habit that had been abandoned practically in the last 30 years, but he has recalled that “the Government is working on the cohabitation between this species and livestock”. However, he said that “the damages caused by wild animals are not the main problem of mountain livestock, but rather it adds to the other issues that the sector is experiencing” and recalled the effort that the Generalitat and the Piroslife project partners are carrying out to implement preventive measures and to compensate for losses in the herd linked to coexistence with the bear.

Ferran Miralles explained that Piroslife is a project promoted by the European Commission within the framework of Life-Natura programs, which contributes to the application of the Community directive on the conservation of nature to maintain and improve natural habitats and animal and plant species of community interest within designated areas within the Natura 2000 Network.

The project has an overall budget of almost 2.5 million to develop various activities related to the consolidation of the bear population in the central Pyrenees, 75% provided by the European Union. At the moment, in the 4 years running of the project and until May 31, 1.7 million have invested (71% of the total) and most of them destined for livestock. The budget has been distributed as follows:

Apart from the financing provided by the Piroslife (25% of which is covered by the project partners), during the period of this project, there have been additional contributions from the Generalitat of the order of 200,000 euros, distributed as follows:

In 2019, when the support of the Life program is over, the Generalitat has committed itself to maintaining efforts on prevention and management of the bear, at least at the levels of recent years. It is also planned to culminate the transfer of competitions in management of fauna to the Conselh Generau d’Aran. The overall cost of the device is estimated at 500,000 euros / year.

The Alt Pirineu Natural Park also awards grants to the livestock sector and the promotion of extensive livestock. This year, of a budget of around 1.5 million, there were dedicated 428,503 euros, almost a third of its total budget, distributed as follows:

In addition to compensation and grants, Catalonia, unlike other territories, has set up a device for the prevention of damage, with a technical team in the Val d’Aran and Pallars Sobirà.

Thus, sheep farmers, the most vulnerable, in a area of permanent presence of the bear, can benefit from a service offered by the Generalitat for free vigilance 24 hours a day during the 5 months that the livestock raises the highest mountain ranges. In some cases, farmers make turns to replace the pastor’s day of rest. Currently, the Piroslife offers 6 groupings: those of Gausac-Casau and Bagergue, in Aran; and those of Isil, Tavascan, Bonaigua and BoldísÁreu, in Pallars Sobirà. 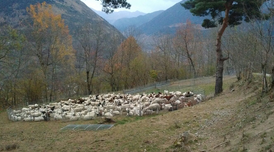 The surveillance system has the presence of pastors and assistants throughout the day, including night hours, in which the livestock is closed in electrified cotes, protected by dogs and next to the shepherd’s refuge. In addition, it includes other activities, such as the arrangement of huts for pastors, transfer of bunkhouses and prefabricated huts, purchase of autonomous electrical systems, furniture and utensils. Also, the grouped sheep has free insurance for accidents and other damages that may suffer while are on the mountain.

With regard to big cattle (cows and mares), in the area with permanent presence of bear, the Generalitat hires support personnel for the surveillance and detection of possible incidents, although it is much less vulnerable to the presence of bear and damages are usually small.

The specific case of Goiat

Given the anomalous Goiat’s conduct, a special device was launched this year to annihilate the animal, first of all, and was ordered a technical assessment of the problematic nature of the specimen without ruling out any scenario, including that of the its extraction of the environment.

Miralles has sentenced that the presence of the bear in the Pyrenees “does not go back and a single specimen can not endanger the work of 20 years.” The decision of the future of Goiat, remind Miralles “will not be taken hot, but based on a technical evaluation that is being prepared” and on a “Protocol of intervention and management of problematic bears” agreed by all administrations. The Department has already set out in July the desire to extract this specimen of the environment, although the technical and legal assessment in which it is being worked is essential.

For this reason, at the technical level, are working to reach a consensus on a protocol to objectively catalogue the problematic bears, including those who are for their predatory behaviour, agreed by all the administrations involved, which is the reference when making decisions.

One of the main points of the new protocol is the inclusion, among the typologies of problematic bears, of the “highly predatory bear” figure, which causes anomalous conflicts with livestock. The other is the differentiated treatment that is wanted to give the bears reintroduced (where there is a plus of responsibility and management) with respect to those born in the Pyrenees. In this process, the will is to dialogue and consult all the administrations to which it belongs and experts in the management of the bear. The important thing, for the purpose of coordination, is that all the southern side of the Pyrenees work with the same intervention criteria and should not be debated on a case-by-case basis and with all the administrations involved, each time the objective conditions to intervene.

Since 1996, Europe wanted to put an end to the imminent extinction of the bear in the Pyrenees, France released 8 specimens (2 males and 6 females) and Catalonia another one in 2016: Goiat. Progressively, this unit, which is at all times located by a GPS tracking collar, has shown an abnormal predatory behaviour, as it has shown a certain attraction towards equine cattle. The predation of the bear on equine cattle is unusual and exceptional and, when it is given, it is usually affecting colts of a few days. This is not a unique case (there is news of another case in Italy), but it is exceptional.

An expert team consisting of technicians is responsible for moving to the site of the facts, before any incident warning, performing a visual inspection, collecting samples, and analysing them, in order to prove the implication of the bones in any attack on livestock. Thus, in order to determine the authorship of the death, in addition to monitoring the animal by means of the GPS signal (in the case of Goiat), the presence of bruises and other signs and injuries in the body of dead animals is also valued; they indicate that they were alive at the time of predation.

Regarding Goiat (which is in France since mid-July) from April to August 31, this team has recorded 27 attacks of this exemplar (12 in Catalonia and 15 in France).  In total, in this period has caused the death of 22 sheep (most in France), 9 horses (almost all in Catalonia), 1 goat, as well as damages in 8 beehives. However, experts agree that Goiat is predatory about cattle, but not aggressive towards people. Regarding the battery of the Goiat GPS locator collar, which is about to run out, the issuer has been programmed to a minimum while in France, to save the battery. It will try to change when returning to Aran.

History of a reintroduction

In the mid-90s the Brown Bear was about to extinguish itself from the Pyrenees, with only a remnant population in the Atlantic area, between France, Navarra and Aragon. To avoid this, the European Union promoted a LIFE program, coordinated between France and Spain, with Navarre, Aragon and Catalonia, which entailed the release of 3 bears in the central Pyrenees to evaluate their adaptation to the environment and test methods of translocation.

Specifically, in 1996, two females were introduced and in 1997, a male Pyros), all from Slovenia. The selection was made according to studies that show that the Balkan bears, from southern Scandinavia and those from south and southwest Europe belong to a single genetic line, which is explained by the fact that it occurred a refuge during the last freezing in southern Europe. These specimens were adapted and had puppies in the area. The French State, in collaboration with Andorra and Spain, released 5 new bears in 2006, 4 females and 1 male (Balou) who died from the impact of thunderbolt in 2014. The latest release goes be that of Goiat, in 2016, by the Generalitat.

So far, the bone recovery program in the Central Pyrenees has been a success and 3-4 native specimens in the Western Pyrenees in 1990 have gone through 43 specimens identified in 2017, mainly in the central Pyrenees.